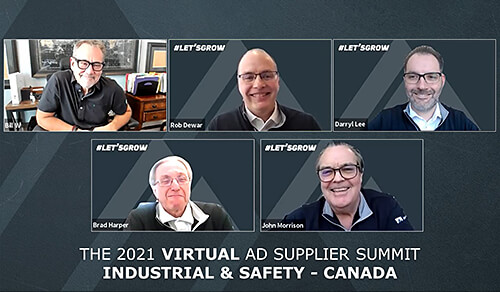 No signs of slowing down for AD Industrial & Safety-Canada
With 114 members and growing, 5,000-plus member employees, and over $2.5 billion Canadian member sales in 2020, independent Canadian distributors continue to grow and thrive. During the conference, Dewar shared the impressive growth that the division saw during the unparalleled COVID-19 pandemic, as well as projected remittances for AD suppliers in 2022.

“At AD Canada, we are passionate about forming and fostering valuable relationships in the industry to allow us to all work together with the dedicated mission of outperforming the market and staying ahead of the competition,” Dewar said. “Even during these unprecedented past 16 months, we were able to grow the Industrial & Safety-Canada Division substantially, and we can’t wait to see the growth that is in store for 2022 and beyond.”

Simpson weighed in on current conditions and future projections for the division.

“This past year has taught us many things, but above all, it’s proven that we are better together,” Simpson said. “While 2020 saw numerous businesses and industries become severely impacted in many ways, the AD membership, being the substantial, nimble alliance that it’s grown to be, outperformed the market and continued to lead the industry by maintaining open minds when it comes to supporting suppliers and bringing new products to the market. By having each other’s backs, it’s with great pride that we can say that many of us have weathered the storm quite well, and at AD, we are committed to driving the continued growth of our members and suppliers with sunnier days ahead.”

Celebrating supplier heroes
The conference also saw John Morrison, AD Canada’s Industrial & Safety Division’s vice president of supplier relations, announce the launch of the Supplier Hero Program, an initiative that recognizes suppliers that consistently go above and beyond for AD Canada and its members.

“At AD, we are built on the principle of quality relationships, because when truly great companies join forces, the outcome is growth and the ability to surpass the market,” Morrison said. “With the strong dedication of our suppliers who are passionate about providing product excellence and who unfailingly invest in the ongoing success of independent distributors, we are able to accomplish just that—the ability to keep members and suppliers ahead of the pack. We commend our devoted supplier heroes today and always.”

The 40,000-square-foot warehouse and office space is conveniently located in the heart of Mississauga and boasts a spacious training center, board room, and other small meeting rooms that members and suppliers can book for their own meetings to emphasize a shared sense of community.

The warehouse program remains a valuable resource to suppliers and members, supporting and enhancing distribution channels to aid AD’s valued partners in growing their businesses. The spacious warehouse is also home to AD Canada’s private label, Tuff Grade, which offers members a variety of quality products at modest prices.

AD Canada coming to members and suppliers live
AD Canada’s Industrial & Safety Division announced that its 2021 Supplier Summit is scheduled to be held in person Nov.15-18 at the Westin Harbour Castle in Toronto. The AD Canada team looks forward to seeing familiar faces, as well as new ones, as it continues to grow its members and suppliers.