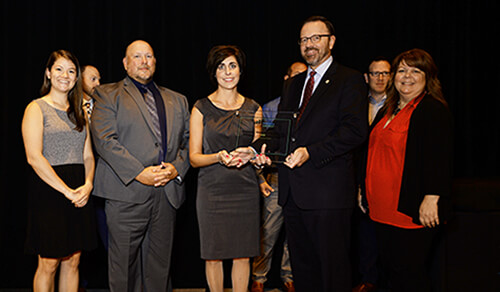 HARRISBURG, PA – Schaedler Yesco Distribution, Inc. is proud to announce that is has been ranked 32nd on the Central Penn Business Journal’s annual list of the Top 50 Fastest Growing Companies in Central Pennsylvania. This is the 9th time that Schaedler Yesco has achieved this milestone.

“Our growth continues to be driven by the needs of the marketplace,” explained President, Farrah Mittel. “We develop new services and programs from customer input. The fact that they are continuing to grow, and they tell us how we can help make them better, fast and more profitable, means we’ll grow along with them.”

In order to be eligible for consideration, companies were required to show revenue of at least $500,000 in each of the fiscal years ending 2016, 2017 and 2018, as well as revenue growth in 2018, as compared to 2016. For-profit entities that are headquartered in Adams, Cumberland, Dauphin, Franklin, Lancaster, Lebanon, Perry or York County were eligible for nomination.

The presenting sponsor of the program, Baker Tilly, calculated the nominations and then ranked the companies according to revenue growth over the three-year period. Both dollar and percentage increases were taken into consideration. This ranking formula led to the list of 50 winners.

Schaedler Yesco and the other 49 winners were honored at an awards breakfast on Monday, September 9, 2019, where the ranks were revealed.